Taking a cue from heroes such as Ben Howard, John Butler, John Smith and the Tallest Man On Earth and a profound love for ancient myths and stories about lost times come together in the distinct sound of Aidan & the Wild's music.

Eindhoven based singer-songwriter and multi-instrumentalist Aidan & the Wild, a.k.a. Diederik van den Brandt, takes his listeners away on a musical journey through his interpretation of folk and americana music. Spending most of his days practicing his instruments results in a singer-songwriter who clearly knows his way around the guitar. Open-tuning finger picking alternated with slide and percussive style techniques produce a saturated and captivating sound. The big blueprint of his songwriting is folk music, but within the spectrum all corners are explored. From groovy americana and uplifting songs about Jesus to enchanting melodies that transport the listener to another world, from personal stories about love to epic works about myths and dragons. Combined with his raw and honest voice and occasional foot percussion he delivers a one-man show that keeps captivating every second along the way as well as an energetic and enchanting performance backed up by his band. 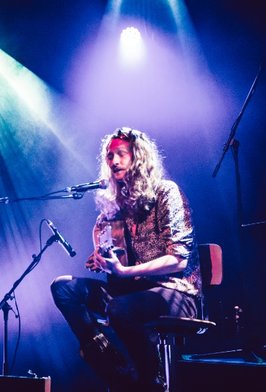 Picture by Lotte Schrander, live at the Effenaar

Still in his early twenties Diederik has close to 400 shows to his name, both as a solo artist, backed up by his band and backing up other musicians such as Baptiste W. Hamon and Desi Ducrot as a side man. Some of his career highlights include opening for Hiss Golden Messenger in de Melkweg, a support tour for Dan Owen (UK), playing the acclaimed Naked Song festival twice, touring through Germany and France, shows in various Dutch pop venues including the Effenaar, PAARD, Luxor Live and Bitterzoet and shows at Once In A Blue Moon Festival (playing with Baptiste W. Hamon (FR) and Tuckerville Festival. In 2015 he was selected to join the Proud of the South project and in 2017 he released his first EP "Iliad", of which the song "Up From The Ashes" ended up to be released on Los Angeles based label Vinyl Moon. In 2018 he made it to the quarter finals of the Grote Prijs van Nederland. His self-produced EP "Homegrown" was released in September 2019, and the single "Dreamer" has appeared in numerous indie/folk playlists by channels such as alexrainbirdmusic and Indie Folk Central generating over a million streams and has seen him playing live at NPO Radio 5 and Radio 2 in Leo Blokhuis' show. Touring with the Popronde in 2019 he was one of the most booked acts with 32 shows in 26 cities.

"Five-star honey for the ear" (transl.)

"...sounds magical and with a rare combination of folk and rock that always feels familiar and welcoming."

Where The Music Meets on single Good Enough, 2018

"A fun little folk tune that makes me want to simultaneously tap my feet uncontrollably, square dance with a loved one, and sit with friends by a fire trading funny stories. Simple and understated, the track is truly pleasant and wistfully nostalgic to listen to again and again."

"The unique beat, with that click, makes my soul do a little backflip each time it strikes."

Indieshuffle on Up From the Ashes, 2017

"A strong debut by a band with a distinct sound" (transl.)

"Iliad is such a nice record to dream away with" (transl.)

"Aidan sings his personal lyrics with a lot of passion, which makes his music extra credible." (transl.)

Designed by Aidan & the Wild